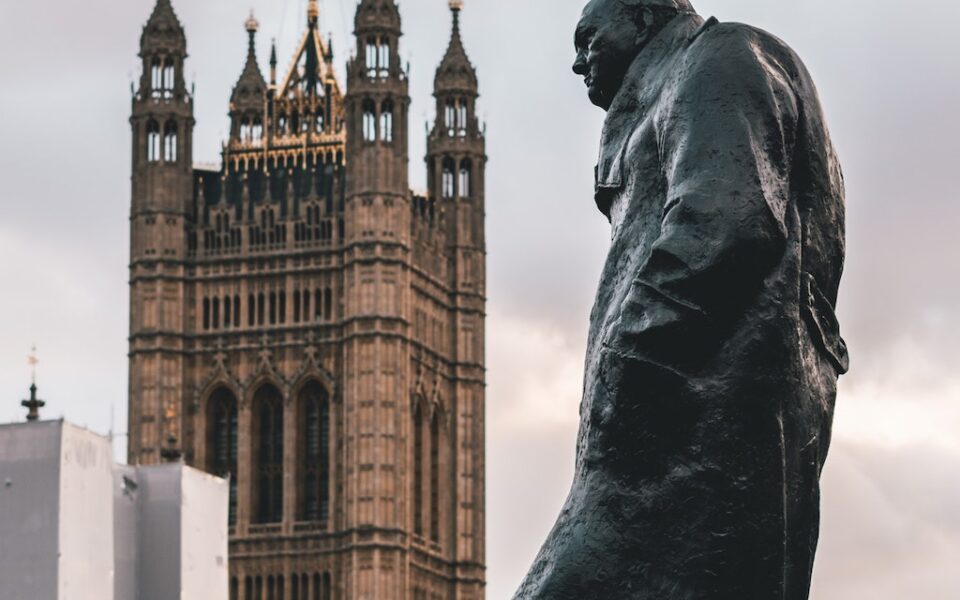 What Churchill Means to Us

There are many kinds of heroes. Some are anonymous, living ordinary lives without recognition or fame. You may know someone like that. They are heroic because they inspire us through their exemplary conduct, self sacrifice and character. If we are lucky they are family members, relatives or friends. If not, then we can always dip into the well of history to find someone.  History is full of heroes. For me, and millions of others, the greatest of these was Winston Churchill.

Churchill’s life was an inspiration. He wasn’t perfect. He made mistakes, like the disastrous Dardanelles campaign of 1915, but, if you look at the whole of his life, it is a source of inspiration and wonder. What do you do when the chips are down? Act like Churchill. Hold the line, or as he once said in part of his twenty minute speech to the boys at Harrow, “…Never give in, never, never, never, never-in anything, great or small, large or petty-never give in except to convictions of honour and good sense.” What a great message for life! What an example he was to all of us! Without Churchill western civilization would not have survived the Nazi onslaught, and many of us would not be here today. But what is more, when we look at the life of Winston Churchill we have a template for how to live our lives.

A Man for all Seasons

There is no aspect of life wherein we cannot look to Winston Churchill for inspiration. Things weren’t easy for him. His father, Lord Randolph Churchill, was distant and erratic and eventually died of complications from syphilis in 1895. Winston was politically isolated from 1932 to 1940. Even during the years leading up to World War II people called him a warmonger and a gangster, and members of his own party condemned him. He was mistrusted by isolationists and appeasers like Lord Halifax and Neville Chamberlain. He was unpopular for his stand on India’s independence, and yet, through it all, he hung on. Through every season of life he displayed extraordinary courage and strength. He was a man for all seasons and a person everyone could look up to.

But what about his relevance today? Times have changed since Churchill’s day. We all know it. What is more, we can feel it. The march of radical liberal progressive values through our institutions has devastated the western world. It has attacked not only the foundational beliefs of our culture, but our grasp on reality. Our most cherished institutions have been undermined or damaged beyond repair. We don’t live in the same world Churchill did, so how can his life have relevance for us? The answer? It is more relevant than ever. In our troubled times Churchill’s life and his beliefs remain important. Some values are timeless, and some truths endure forever and so it was, and is, with Winston Churchill. His courage and resolve aren’t exclusive to any particular period of time. His love of liberty, democracy, western culture and justice ring true through the ages, and his personal qualities of grit and determination are needed more now than ever. The more we emulate Churchill the better things will be.

The War on Winston

It should surprise no one that radical Marxists and liberal progressives are attacking Winston Churchill. Their twisted and unbalanced viewpoint about one of the greatest men who ever lived is not surprising. For them Churchill was an imperialist, a colonialist and a racist, plus a lot of other unsavoury names having no basis in historical truth. Recently they have launched a campaign against him. His statue was desecrated in London and had to be encased in a metal box to protect it. Academics have vilified him saying that he was the perpetuator of an oppressive system based on colonialism and racism. All the catch phrases of the radical left are being used to attack him. Some are even saying that he was a bad prime minister. But, as professor J. Rufus Fears once said, “Only a professor would say that Churchill was a bad prime minister!” Everyone else knows that he was a hero.

I’ve applied Churchill’s truths to almost every problem and obstacle I have faced in life. He has never once let me down. In fact, when things have gotten particularly bad I have even recited the mantra “What would Churchill do?” Almost immediately my spine has stiffened, and I have received a much needed transfusion of courage. Like him, I knew the problem was not going to go away, but that I could handle it and would eventually triumph. Churchill taught me that. At one point when the Battle of Britain was raging and London was burning he came up from his underground shelter, surveyed the scene and said. “We’ll get them for this.” No defeatism, just a burning conviction that England would survive, and that they would make their enemies pay. Now that’s courage.

What We Need to Know

As conservatives we need to know that we are Churchill’s heirs. We carry on the fight for him, ourselves and future generations. It is our values and beliefs that will save civilization and preserve the timeless values and sacred traditions built up over centuries, just as it was Churchill’s values that did so in his time. But we also need to remember that each of us must be Churchillian in our daily lives, especially in this “Our Darkest Hour.” For us the struggle may not be against Nazi Germany, but it is against forces no less dark in their intention to strip us of our freedoms and subject us to tyranny. What would Churchill do if he were alive today? He would defiantly resist and fight ferociously against what is happening to us at this time in our history. He would never give in. Perhaps his courage and character are best illustrated in a couple of his most memorable statements:

“There is only one answer to defeat, and that is victory.”

“The only guide to a man is his conscience; the only shield to his memory is the rectitude and sincerity of his actions. It is very imprudent to walk through life without this shield, because we are so often mocked by the failure of our hopes; but with this shield, however the Fates may play, we march always in the ranks of honour.’

Thank you, Perry, for your reminder of PM Churchill’s tenacity in the face of enormous opposition, both at home and abroad. I appreciated the book, “Darkest Hour”, by Anthony McCarten. “A Man for All Seasons” is the title of a play about another hero of conscience, Sir Thomas More. More was not without his faults, but was, like Sir Winston Churchill, a man who stuck to what he believed was right, despite the opposition. In More’s case, ultimately it meant losing his head. Thankfully, few of us have to worry about that consequence!

This is a moving tribute and somehow it is distilled for me in Churhhill’s words, which Mr. Foster’s witing and Mr..B
Brian Peckford’ life and being and work evoke; ” When look back into the past, if you look far enoungh, mind you, you see the future”.

Excellent reminder, Perry! We are in need of “Churchillian” courage and strength and perseverance today in Canada as we, like him, stand against the forces of evil in our time. The beauty of history is that we have the benefit of reading the lives of those ‘giants’ who have gone before and know how it is that they overcame, how they stood firm and how they defeated tyranny. Let us be diligent students of history and learn to stand shoulder to shoulder with the many Churchill’s of the past!

An important blog essay and a timely reminder concerning the ever-relevant speeches of this great man; as Churchill writes: “Let each man search his conscience and search his speeches. I frequently search mine” (https://www.nationalchurchillmuseum.org/their-finest-hour.html). You insightfully remind us Perry, that as Churchill put it in his Finest Hour speech, “if we open a quarrel between the past and the present, we shall find that we have lost the future” (ibid).

Having been made redundant by Duncan City as Town Crier because I was Colonialist I have continued on in a Town Crier role. I have run wedding ceremonies, cried at church book sales, and proclaimed the Queens Platinum Jubilee at the Charles Hoey VC park. My culture will not be disparaged. I have major local engagements, seems I have not been cancelled by the local public .Beneath the surface the public is not happy. We have to face up to the liberal Wokists.

Hi Ben. I sent a supportive letter to the Cowichan Valley Citizen regarding your recent town crier activity in aid of the Queen’s Platinum Jubilee. We’ll see if they print it. It’s so good to see you back in your very important role as a Crier.

Thanks Perry. It can be lonely out there sometimes I attended Sir Winston Churchills 1965 lying in state at 2.00 AM. There were15,000 people in front of me lining the embankment. Westminster hall was so impressive. Great hammer beams and flagstones the size of dinner tables and the soft shuffle of feet murmured. Forever etched in my mind. Tell the truth it will not betray you. During his wilderness years of 1920-30 he had contacts which kept him better informed than the Government.

I saw you on the street in old Duncan, Ben, and was in my car, ready to drive away. I had a sense to get out of my vehicle and ask you who you were, and what you were doing! You began chatting with another person, and the moment passed, but it’s so neat to know about what you’re doing!

Yes, Churchill was a great man of history however this quote of his is FALSE:
“The only guide to a man is his conscience;…”
I suggest everyone’s conscience can be faulty. The ONLY guide to mankind is God’s word. That is an objective moral standard and not a subjective standard like one’s conscience. I suggest the Hero’s of the Bible outstrip Churchill.

Thank you, Perry, for this reminder of the necessity of tenacity. I am reminded of a wonderful interview many years ago, David Frost interviewing Billy Graham. David Frost asked, ” So, Billy, who’s winning?” Billy paused thoughtfully then said,
“Right now it looks as if the devil’s winning….but in the end…God wins.”

The admonition at the conclusion of the book of Ephesians urges us to “…withstand on that evil day, and having done everything, to stand firm….stand therefore…”