Previous postIt Didn't Happen That Way
I Am Not AshamedNext post 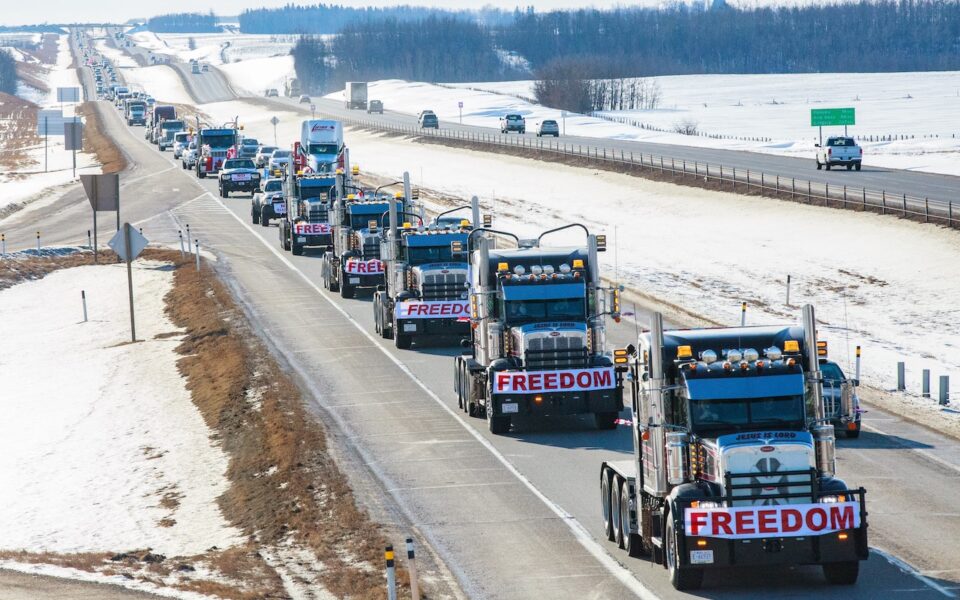 What the Trucker Convoy Taught Us

It has been a while now since the Trucker’s Freedom Convoy was broken up and its participants either dispersed or punished. It has also been a while since the disgraceful example of freezing people’s bank accounts took place. I say a while since, in the world of politics and the media, a month is an eternity. So what have we learned?

We have learned that Canadians are braver than we thought. They shook off their lethargy, protested, and showed the world they were willing to go to the mat for something they believed in. That is the good news. They also proved that they had the courage to protest an issue millions cared about, and thousands were brave enough to support on bypasses, highways and in rallies across the nation. Great news. A lot of inaccurate propaganda has been spread about the Freedom Convoy, but in the end we are left with a hopeful sign for the future. Canadians are back, and we won’t take things lying down.

Things Will Never Be the Same

The Trucker’s Freedom Convoy changed things. There’s no doubt about it. Those who think the Covid mandates started coming down by themselves are mistaken. The convoy was instrumental in bringing them down. It inspired thousands of us to take action on an issue we cared about. Provincial governments heard that, and it gave them permission to end the mandates. The convoy became a popular movement that influenced Canadian political life. Now that the precedent has been set, it is unlikely that it will be forgotten. Canadians led the way in a world wide movement and nothing can change that

And Now for the Bad News…

But there is bad news as well. The Canadian government, under Trudeau’s Liberals, together  with the legacy media, spread misinformation about the convoy and used totalitarian legislation to end it. Perhaps never in Canadian history has a government acted in such an authoritarian way. Facts about the convoy were distorted. The C.B.C. has since apologized, but not to the degree they should have. Both government and the media went beyond their powers in crushing a popular protest. It’s bad news for us and democracy and just plain wrong.  Declaring the Emergency Measures Act was unnecessary, excessive and oppressive. We can live in the hope that one day that fact will be recognized, but for now we must face facts. The “True North, Strong and Free” is not as free it once was. We the people must make it so again.

The Convoy taught us a lesson. It is best expressed in the old but valuable cliché “Freedom Isn’t Free.” From now on we will have to fight for our freedoms and defend them. Against who? The sad answer to that is our own government and the legacy media complex. Since the end of the second World War we have taken our rights and freedoms for granted. Why wouldn’t we? The unprecedented peace and prosperity we have experienced since that time convinced us that those rights were unassailable, that they would be there forever, and that totalitarianism could never take root. We can’t afford to make that assumption anymore.

The famous Canadian novelist Robertson Davies once referred to the “passionate underlife of the Canadian people.”  It shows itself in events like the Freedom convoy, heroic wartime bravery, flashes of brilliance in sports and the arts, our fight against an unforgiving climate and terrain, a patriotic passion for our nation and in a thousand other ways. Just when you think Canadians are hopelessly mild mannered and uncaring they rise up. We need a burst of that “passionate underlife” now. We should never let the memory of the Trucker’s convoy die. We should continue to protest the removal of our freedoms and transform the issue into a movement that encompasses the nation. If we don’t we will only have ourselves to blame later. From the very beginning the Convoy was a legitimate expression of the  people’s will and we should never let that fact be forgotten. Our future rights and freedoms depend on it.

Thanks, Perry! Well said. One of the frustrating things about media is what has been called “the news cycle” which so quickly jumps from one important news event to another to the point that what was moments before, extremely important, is now, moments later, all but forgotten! When Russia attacked Ukraine ‘moments’ after the Canadian government’s attacks on peaceful protesting citizens, I feared that the events of the “freedom convoy” would be swept under the proverbial rug. In fact it appeared that the legacy media and the Trudeau elites were eager to do just that! But, thank the Lord, there… Read more »

Great blog post and comment. I am reminded of what Rushdoony writes in his book Law and Liberty: “Man cannot be changed by statist legislation; he cannot be legislated into a new character.” It seems to me that the anger aimed at the truckers and their supporters was partly driven by the realization that Canadians were doing precisely what Rushdoony points out: they were refusing to “be legislated into a new character” by health mandates, woke education, culture wars, and so on.

Indeed. The powers that be don’t like it when the people actually act like they have some rights under a constitutional monarchy and democracy.Instead they co-opt the language around it and falsely act as though they are the ones who are protecting democracy while all the while crushing it. Rushdoony is right.

As usual great points are made by Perry! 👍 Regarding “From now on we will have to fight for our freedoms and defend them. Against who? The sad answer to that is our own government and the legacy media complex.” I suggest we also need to fight against Big Businesses (Crony Capitalist companies), Big Pharma, and the censorship of Google, YouTube, Facebook, and Twitter. Each of us can minimize or eliminate the use of these propaganda and censoring vehicles. We can also support the JCCF https://www.jccf.ca/ who are ligating against the blatant fascist actions by our governments. Hopefully they will… Read more »

I completely agree with you. Woke corporations and their propaganda like message must be defeated. Read Woke Inc. by Vivek Ramaswamy for a full picture of how they did this and why. If we don’t defeat these people their influence will cripple western society. It’s astonishing how they have gained so much power in the first place. It terrifies me.

Given that 64 percent of Canadians will vote for the party that dedunds the CBC, I think all of these observations by Mr. Foster are very timely and important.

I believe only some CPC leadership candidates have come out with the position to defund the CBC but I believe the PPC has that as one of it’s policies? btw, WHERE were the outspoken CPC politicians during the the HUGE overkill of the Covid19 mandates? The PPC were speaking out. When the leader of the CPC, O’Toole made out like he was a conservative and then got rid of REAL conservatives like Derek Sloan then should we trust them again?

Canadians are deeply dissatisfied with the state broadcaster, but whether or not they will be able to connect the dots and see how it is connected to the Liberal Party of Canada or the NDP/Liberal alliance remains to be seen. Personally, I would like to see the entire network dismantled and built again from the bottom up as would millions of others. It’s about time.

Thank you, Perry, for your observant and thoughtful comments. The quote from
Robertson Davies: “the passionate underbelly of the Canadian people” is certainly descriptive of the Truckers’ Convoy. Sadly, totalitarianism marcheth onward.

You have not discussed the effects of the convoy occupation in the people of Ottawa. These people were failed by three levels of government. A group of protesters- some reasonable, others supporting the overthrow of our elected government- did not care that they abused and hurt others