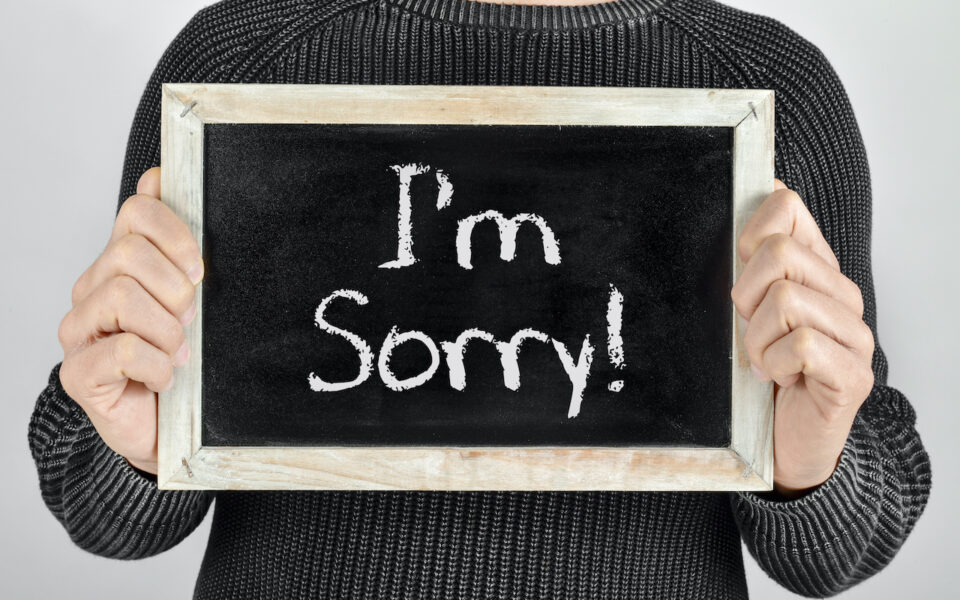 Why I Stopped Apologizing

My father taught me to be polite. He believed in the importance of respect and brought me up with a code that had clear expectations. You opened doors for ladies. “Ladies first, son” he would always say. You treated older people with respect and never spoke to them as you would to your friends. The code was clear. It included apologizing when you did something wrong, or when you discovered that you had offended others. It meant that you gave others a chance to speak and respected their right to express their view. But all that has changed. I don’t apologize anymore.

Don’t get me wrong. I’m still courteous. When it’s obvious that I’ve done something wrong I’ll apologize, but I don’t waste apologies, and I don’t extend them to those who don’t appreciate them. For example, I don’t apologize to leftists or liberal progressives. Why? Because they don’t play by the rules, so an apology to them is a waste of time. They see it as weakness, and don’t extend the same courtesy to me or others. In these difficult and contentious times I can’t afford to waste energy or misdirect my sentiments.

The famous English author P.G. Woodhouse said. “It’s a good rule in life never to apologize. The right sort of people do not want apologies, and the wrong sort of people take a mean advantage of them.” That may be a bit of an extreme statement. There are times when a genuine apology, directed to someone you care about or admire, makes sense. But for the most part Woodhouse was right, and it applies especially to liberal progressives. Am I being mean? I don’t think so.

“Apologize For Who You Are and What You Believe!”

Ask yourself what liberal progressives and leftists want. They don’t want to dialogue with you. They aren’t interested in a contest of wit and wills. They aren’t interested in compromise. They want you silenced, crushed and gone. Sometime in the early 2000s, this became evident. They wanted an end to conservatism and conservative thought. They wanted everyone to think as they did, and everyone to obey their value system. Or else. When they gained power radical liberal progressives and leftists changed laws and rigged the system so that their ideology prevailed. Even language had to change so that progressivism could triumph. Part of this meant that we conservatives had to apologize for our time honoured beliefs and convictions. My answer to that? No thanks.

I Stand By Who I am and What I Believe

As a white conservative male this is important to me. Of all the groups the progressive left hates I am the one they’d most like to destroy. What they want me, and millions like me, to do is apologize for who we are and what we believe. I won’t. To do so would be an abject act of cowardice done so that I could “go along to get along.” If I apologized for who I was there would be no end to it. The left would demand that I reject my beliefs and conform to their “reality” which, by the way, isn’t even real half of the time. That’s way too high a price to pay. And, anyway, why should I have to apologize for who I am and what I believe. There’s nothing wrong with it.

So I won’t and neither should you. Once the extreme left gets us to apologize the next step will be for us to publicly renounce our beliefs and the one after that will be to re-educate us. Don’t think that’s impossible. It could happen. In January of 2020, Kyle Jurek, an Bernie Sanders campaign field organizer, was caught by Project Veritas saying that if his candidate won it would be a good idea to set up re-education camps for Trump supporters to deprogram them, just as Nazis had to be re-educated after World War 2. https://www.youtube.com/watch?v=06_P0kGPgAg Why would we allow them to do that to us? We shouldn’t, and the first step in preventing it is to stop apologizing. I hope you won’t in the future.